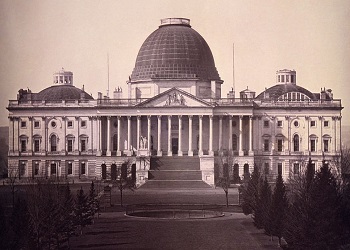 U.S. Capitol. The Thirtieth U.S. Congress met from 1847 to 1849. The only term in which Abraham Lincoln served.

Lincoln’s campaign for congress started in 1843 during his fourth and last term in the Illinois legislature. He took a more active role in his party by attending Whig meetings and taking a leadership role. In 1843 he still lacked support and lost the 1843 Whig nomination to John J. Hardin from Jacksonville.

The following year he campaigned for his friend Edward D. Baker for congress and for Henry Clay as the Whig presidential candidate. For three years Lincoln had campaigned and built support among Whig delegates. In 1846, as he gathered support and popularity within his party, Abraham was nominated as a Whig candidate for congress. The election took place on August 3rd; he ran against Democrat Peter Cartwright and won. He was the only Whig congressman elected from Illinois.

First time in the nation’s capital 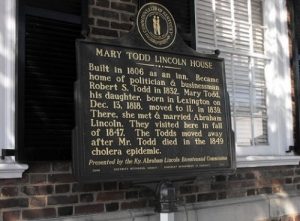 House of Mary Todd’s father, Robert Todd. Mary decided to stay with her father in Lexington, Kentuky while Abraham worked in Washington DC.

It was the first time for Mary and Abraham in such a large city, it was almost overwhelming. Washington had a population of 40,000 including 2,000 slaves and 8,000 free blacks. The Lincolns rented one large room at the boarding house of Ann G. Sprigg where previous Illinois congressmen, Stuart and Baker, had resided during their term in congress. Mary was dissatisfied with the living arrangements as her boys were the only children in the boarding house and received daily complaints about their behavior and noise. Mary decided to go to Lexington, Kentucky to her father’s house.

Lincoln sought to provide leadership to his party during his term in the thirtieth Congress where 200 of the representatives were new. His experience in the Illinois state legislature gave him the skills to deal with parliamentary procedure. Abraham was assigned to the Committee on Post Offices and Post Road, and he also served on the Committee on Expenditures in the War Department. 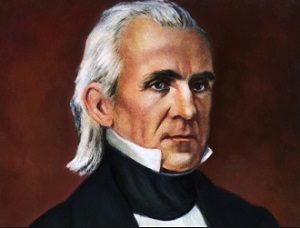 He got to know congressmen who later would become part of his administration.  He met Caleb B. Smith who would become Secretary of the Interior and Robert C. Shenck who Lincoln would appoint major general in the U.S. Army.

During the 1848 presidential campaign he found the Whig party in a weak position. The Democratic administration of James Polk had been greatly successful. In an effort to promote the election of General Zachary Taylor, Lincoln accused Polk of unconstitutionally invading Mexico and declaring war. He argued that people have the right to rebel against Mexico and form a new government to suit them. Many in the opposition reminded him of his position when he was president at the brink of the civil war.

Even though the Whig party was highly disorganized, Zachary Taylor won the elections in 1848 and served as the 12th US president from March 1849 until his death in 1850. Taylor lacked the support among the antislavery Whigs who objected a Whig slaveholder president. Many had left the party and others threatened to leave.

In his second session in Congress the topic of slavery  and its expansion to new territories took center stage. Antislavery congressmen failed to pass the Wilmot Proviso which would prevent slavery from being adopted in the new territories acquired from the Mexican-American War. Abraham Lincoln voted for the passage of the Wilmot Proviso. The Proviso lacked support and antislavery congressmen moved on to propose the abolition of slavery in the District of Columbia. Franklin & Armfield was the country’s largest slave trade center in the country and was shamefully located a few blocks from the Capitol. Many considered it an embarrassment as black men, women and children were traded in front of residents and visitors of the Union’s capital.

Lincoln served in Congress for only one term, from March 1847 to March 1849. At the end of his appointment in Congress, Lincoln returned to Springfield. He was offered the office of the secretary to the governor of the Oregon Territory but he declined. After Secretary of State, John M. Clayton, realized that Lincoln had been overlooked and had been the most active Illinois Whig supporter in the campaign of General Taylor, he offered him the governorship of the Oregon Territory but again, he declined the offer. Back in Springfield he resumed his law practice with his junior partner William Herndon.