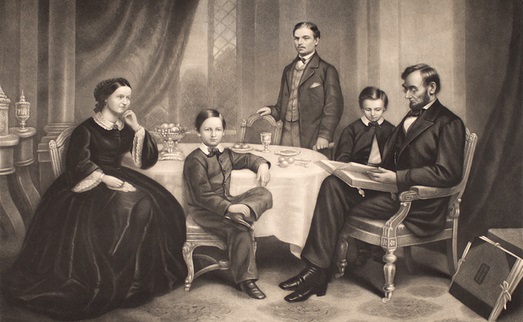 Print of the Lincoln family, by engraver John Chester Buttre, 1873. Based on the painting by Francis Carpenter.

Abraham Lincoln and Mary Todd Lincoln had four sons, all were born in Springfield, Illinois and only one survived until adulthood. 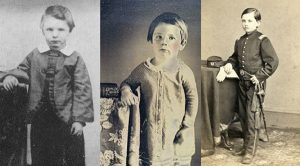 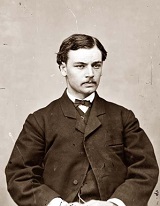 Robert was the couple’s first child and the only one who lived to adulthood. He was born on August 1, 1843. Robert was named after his maternal grandfather. Robert did not enjoy the same warm relationship his brothers had with his father as he was always away travelling and working when he was growing up. He graduated from Boston’s Phillips Exeter Academy in 1860 and then studied at Harvard University from 1861 to 1865. He served at the end of the Civil War under the command of Ulysses Grant as part of his immediate staff.

After his father’s death his mother and brother Tad moved in with him to Chicago where he was attending Law School at the Old University of Chicago. In 1868 Robert married Mary Eunice Harlan, they had two daughters and one son. Robert became Secretary of War from 1881 to 1885 under the administration of President James Garfield. From 1889 to 1893 he served as US minister to the United Kingdom under President Benjamin Harrison. At the end of his assignment he returned to his private law career.

Robert Todd Lincoln died in his home in Vermont on July 26, 1926, he was 82 years of age. He is buried at the Arlington National Cemetery. 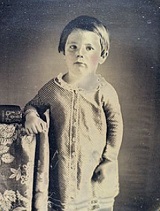 Eddie was born on March 10, 1848. The second child of Abraham Lincoln and Mary Todd Lincoln was named after the couple’s friend Edward Dickson Baker.

Eddie died when he was 3 years old, one month before his 4th birthday. It is believed that he died of tuberculosis. He was buried at Hutchinson’s cemetery in Springfield, Illinois. After his father’s assassination Eddie’s remains were transferred to the Oak Ridge Cemetery in Springfield where he rests next to his father, brother Willie and was later joined by his mother. 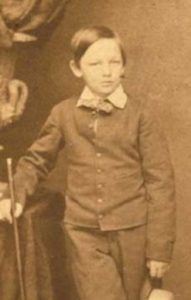 Willie was born on December 21, 1850 in Springfield, Illinois. Willie became ill with what is believed was typhoid fever from contaminated water from the Potomac River. Willie died in the White House on February 20, 1862 when he was 13 years old. He was initially buried in the Oak Hill Cemetery in Georgetown but his body was transferred to Oak Ridge Cemetery in Springfield after his father died. He lies next to his father, mother and brother Eddie. 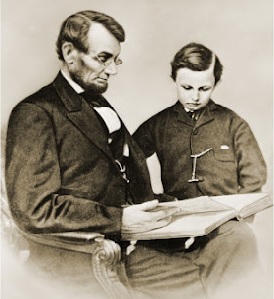 Tad was the 4th and last child of Abraham and Mary Lincoln. He was born on April 4, 1853. He was nicknamed Tad by his father because he wiggled like a tadpole as an infant. He was born with cleft lip and palate causing him to have speech defect during his life.

Tad and his brother Willie contracted typhoid fever at the beginning of February 1862. Tad recovered by Willie died. Tad was an impulsive boy with lots of energy, he never attended school and was taught by tutors.

Tad died on July 15, 1875 at 18 years of age. It is believed that he died of tuberculosis. He was buried at the Lincoln tomb at the Oak Ridge Cemetery alongside his father and his other two brothers.