Abraham Lincoln came from a working family. His mother was Nancy Hanks, believed to be an illegitimate daughter of Lucy Hanks and a Virginia planter. Not much is known from his maternal side. His father was Thomas Lincoln, seventh generation of Lincolns in America. His grandfather, after whom Abraham was named, moved from Virginia to Kentucky in the early 1780s to seek fortune. One day Abraham and his three sons, Mordecar, Josiah and Thomas were planting corn when they were attacked by Indians, Abraham was killed. As it was customary, his oldest son, Mordecar, inherited his father’s assets. He ran away with all the money leaving the rest of the family destitute.

Replica of the family one room cabin in Sinking Spring Farm where Abraham Lincoln was born. Source: National Park Service.

As a young man Thomas had to work hard and eventually saved enough money to buy his first farm in Hardin County, Kentucky. In 1806 he married Nancy Hanks, and they built their first house in Elizabethtown. The following year they had their first daughter, Sarah. In 1809 the couple bought a 300 acre farm called Sinking Spring Farm and built a small one-room log cabin. Here is where Abraham Lincoln was born on February 12, 1809.

In 1811 the family moved to a more fertile farm on Knob Creek where Nancy gave birth to a third child, Thomas, who did not survive infancy. In 1816 when Abraham was 7 years old the family moved across the Ohio River to Indiana. The country was expanding its frontiers and promoting pioneers to inhabit those lands. Thomas Lincoln had lost his farm due to unclear property titles of land ownership and did not have the resources to clear his land titles in court. In 1792 Kentucky was admitted to the Union as a slave state and Thomas did not want to compete with slave labor. His religious conviction and principles made slavery unacceptable. 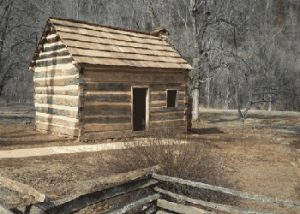 The Lincoln family lived on 30 acres of the 228 acre Knob Creek Farm from the time Abraham was two and a half until he was almost eight years old. Source: National Park Service.

The family settled in unoccupied land in Pigeon Creek, Indiana. Indiana was excluded from slavery by the Northwest Ordinance and the government had surveyed the land guaranteeing clear property titles. Abraham Lincoln was 8 years old and was put to work on the field clearing trees, planting, plowing and harvesting.

In 1818 the Pigeon Creek community was devastated by milk sickness or brucellosis. This illness was inflicted when drinking milk from infected cows that had eaten the poisonous white snake root plant. Symptoms included fever, dizziness, nausea and stomach cramps followed by unconsciousness and death. His aunt and uncle, Elizabeth and Thomas Sparrow, died first followed by his mother, Nancy, who died on October 5, 1818. This became a difficult period for the Lincoln family. His sister Sarah was 11 years old and was left with the responsibility of the maintenance of the household. Abraham was 9.

Within a year of Nancy’s death, Thomas married Sarah Bush Johnson, a widow from nearby Elizabethtown who had three small children, Elizabeth, John and Matilda. The two families blended together and Abraham soon considered Sarah his own mother. She was especially fond of Abraham whose personality she found agreed with hers.