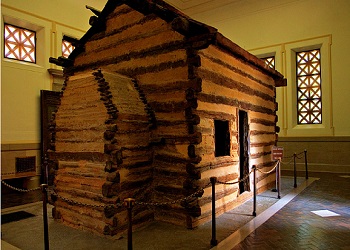 This is a replica of the single room log cabin where Abraham Lincoln was born. It is located in the Lincoln Birthplace Memorial in Hodgenville, Kentucky.

Abraham Lincoln was born on February 12, 1809 in a one-room log cabin in Sinking Spring Farm in Hardin County, now La Rue County in Hodgenville, Kentucky. Abraham Lincoln came from a working family. His mother was Nancy Hanks and his father Thomas Lincoln.

Abraham had an older sister, Sarah, and a brother, Thomas, who did not survive infancy. The family lived in Sinking Spring Farm for his first seven years. 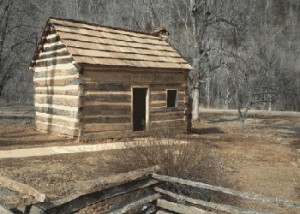 In 1816 when Abraham was 7 years old the family moved across the Ohio River to Indiana. Thomas, his father, had several reasons to move his family out of Kentucky. One reason was that the fertility of the soil of Sinking Spring Farm was decreasing every year. Also, Thomas was facing a lawsuit over his property titles.  Property lines in that area were not clearly defined as land was not officially surveyed. Thomas Lincoln did not have the resources to clear his land titles in court. In 1792 Kentucky was admitted to the Union as a slave state and for Thomas slavery was morally unacceptable. The best option for him was to move his family to Indiana, a state that was excluded from slavery by the Northwest Ordinance. The land in Indiana was properly surveyed and the government guaranteed clear property titles.

In Indiana the Lincolns settled in unoccupied land in Little Pigeon Creek, so remote that there was no trail leading to their property. Abraham, then 8 years old, and the entire family was put to work clearing bushes and trees, fencing the property, building a log cabin, planting and plowing.

The death of Lincoln’s mother 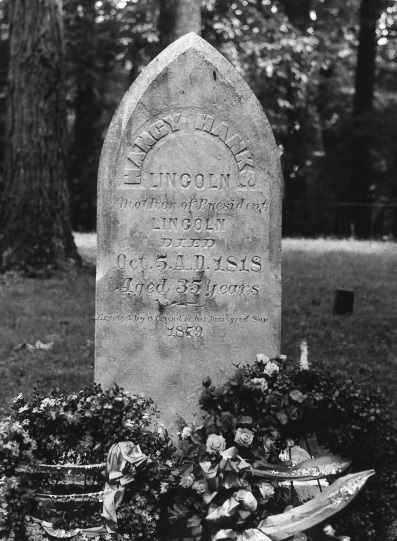 In 1818 the Pigeon Creek community was devastated by milk sickness or brucellosis. This illness was inflicted when drinking milk from infected cows that had eaten the poisonous white snake root plant. Symptoms included fever, dizziness, nausea and stomach cramps followed by unconsciousness and death. His aunt and uncle, Elizabeth and Thomas Sparrow, died first followed by his mother, Nancy, who died on October 5, 1818. This became a difficult period for the Lincoln family. His sister Sarah was 11 years old and was left with the responsibility of the maintenance of the household. Abraham was 9.

Within a year of Nancy’s death, Thomas married Sarah Bush Johnson, a widow from nearby Elizabethtown who had three small children, Elizabeth, John and Matilda. The two families blended together and Abraham soon considered Sarah as his own mother.

Sarah enrolled Abraham and his siblings in Andrew Crawford’s school, about a mile from his house. He attended school for 3 months, after which it closed and they did not attend school for the rest of the year. James Sweeney opened a school 4 miles from where the Lincoln family lived. But because of his house and farm chores Abraham only attended sporadically. The following year he attended another school one mile from his home.

By the time Abraham was 15 years old he had about a year of education. What he learned in school was not all about academics. For the first time he had the chance to socialize with other children, he had an extraordinary ability to tell stories, make rhymes and speak in public. From very early on he showed great self confidence. Abraham Lincoln was an avid reader and sought books to read from neighbors, he was mostly self educated. 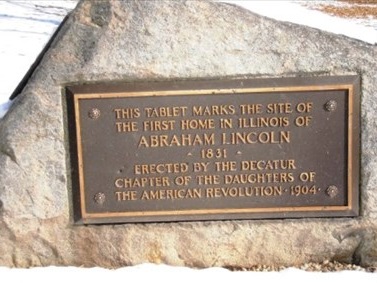 A stone memorial marks the place where Lincoln and his family lived for one year from 1830 to 1831. Source: Lincoln Trail Homestead State Park.

In his teenage years the relationship with his father began to deteriorate. His father was losing his vision and relied on Abraham to make ends meet. He had eight people who relied on him. Abraham was not the physical type, he preferred to read and write poetry than to work in the farm. He was considered lazy and his father’s dissatisfaction contributed to their poor relationship.

In early 1830 the family moved from Pigeon Creek in Spencer County, Indiana to Macon County, Illinois. John Hanks, his mother’s cousin, was  settled there and had great results with the fertility of the land. Thomas sold his land and packed his belongings and in March 1830 he and all the members of his family left Pigeon Creek.

The following year Abraham turned 21 and left his family, he settled in New Salem.