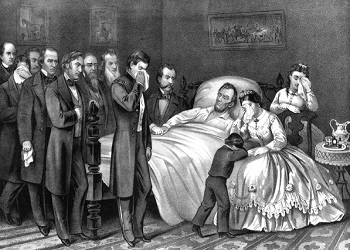 After Lincoln became president in 1861 threats against his life became common. The first attempt to murder him was during his voyage to the nation’s capital from his residence in Springfield, Illinois. The newly elected president had to take a secret night trip through Baltimore to keep him safe from a conspiracy to assassinate him. However, during his entire presidency Abraham Lincoln never took seriously any threats against his life.

After his reelection in 1864 threats considerably increased as Confederacy sympathizers realized that he would be in the White House for another 4 years. There were rumors that Confederates wanted to kidnap the President as a hostage for peace negotiations or to use him to release the 20,000 captured Confederate soldiers.

In September 1864 Thomas Nelson Conrad, a Confederate preacher and spy, had planned to kidnap the president. Acknowledging threats the War Department increased his security. 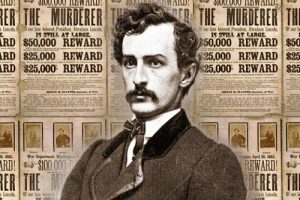 John Wilkes Booth was an actor and a confederate sympathizer.

Booth was an actor whose career was declining. He was a Confederate sympathizer and had contacts with the Confederate secret service. Booth and six of his associates had planned to kidnap the president on March 17 while attending the play Still Waters Run Deep at the Campbell Hospital. They planned to hold him hostage in exchange of the thousands of imprisoned confederate soldiers. The plan failed when Lincoln did not show up in the location where the kidnapping was to take place.

On April 9 Lee’s Army surrendered in Appomattox. Two days later, on April 11, President Lincoln would give his last public address. He addressed a crowd near the White House where he recommended speedy restoration of the Union, the reconstruction of the South and suffrage for African Americans who had served in the Civil War and who were educated. Giving the same rights to African Americans was the last straw for Booth who was in the crowd and decided it was time to act.

Booth acted on his own with no instructions from the Confederate secret service. He had three associates: Atzerodt, Herold and Paine (or Powell). Atzerodt was to murder Vice-President Andrew Johnson; Paine, Secretary of State William Seward; and Booth would murder President Lincoln. Booth who was the ring leader was hoping to sever continuity in the chain of command by eliminating the top three people in the administration and create chaos in the government.

The assaults were planned to occur simultaneously at 10:15 pm. Atzerodt changed his mind at the last minute and fled. Paine managed to wound Secretary of State William Seward. 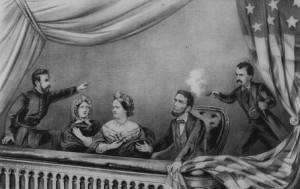 President Lincoln received a lethal shot in the back of the head when attending a play at the Ford’s Theater.

On Friday, April 14, 1865 President Lincoln, his wife, a young army officer named Henry Rathbone and his fiancé, Clara Harris, were attending the play “Our American Cousin” at Ford’s Theater when the President was shot to death by John Wilkes Booth. Five days earlier the Union Army under General Ulysses Grant had defeated General Robert Lee who surrendered bringing an end to the Civil War.

Booth was a very well known actor in the nation’s capital theater world and had no trouble finding and accessing the president’s private box at the Ford’s Theater. At 10:13 pm from about 2 feet Booth shot President Lincoln with a .44 caliber single shot-derringer. Booth dropped the pistol while Rathborne rushed at him managing to force him against the rail, Booth attempting to defend himself stabbed  Rathborne in the arm with a dagger. Booth was able to jump from the balcony but his left boot got caught in a flag draped over the rail and broke a bone on his leg. However the actor managed to escape through the back door. 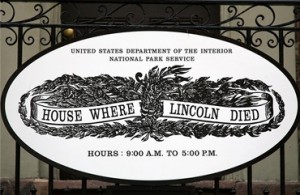 Lincoln was taken to William Petersen Boarding house located at  516 10th Street NW in Washington, D.C, across the street from the Ford’s Theater.

The bullet struck Lincoln in the back of his head behind his left ear. A young Army surgeon, Charles Leale, who was attending the play quickly approached Lincoln’s box. Leale cleaned the wound and prevented further bleeding. The president was moved to a house across the street at William Petersen boarding house. The White House was too far and the road too bumpy to transfer the president.

Joseph K. Burnes, the US Army Surgeon General and three other doctors declared that the wound was mortal and the bullet was too deep in his skull that it was almost impossible to be removed without causing immediate death. The first lady was in shock and had a nervous breakdown.

The hunt for John Wilkes Booth was one of the largest manhunt in American history with 10,000 police, federal troops and detectives trying to track him down.