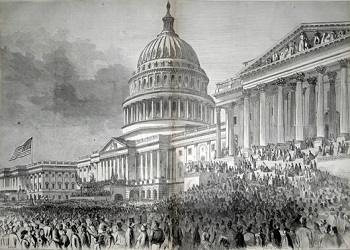 Reconstruction was part of the contest for the next presidential elections. Lincoln was reelected on the belief that he should better finish the difficult job he had already started and that he was the best person to reestablish the national honor.

His reelection campaign rested on War Democrats who joined Republicans forming the National Union Party. Public appearances promoting his reelection were rare, he did not attend rallies or gave speeches but he was involved in the management of his campaign behind the scenes.

Confederates sympathizers of the North viewed Lincoln’s reelection as a step back and hoped he would be defeated. In order to prevent his reelection Confederate agents sent emissaries to Canada to try to work a peace agreement. Lincoln sent his envoys with the clear mission to let know his condition was a full repeal of slavery in the South and then he could start negotiating a peace agreement. His condition was rejected. Confederate agents had also planned uprisings in Chicago during the Republican convention and violent demonstrations in major cities during election day.

Many Americans supported Lincoln’s reelection and supported the Union cause even thought the war was bloody, lasting longer than anticipated and leading the country to excessive debt.

African Americans were not allowed to vote in the elections but most, if not all, supported the president’s reelection. Abolitionists who were critical of his policies now favored him over Democrat candidate George B. McClellan. Frederick Douglass, Sojourner Truth, and white abolitionist William Lloyd Garrison commanded great leadership and influence on his reelection. Garrison controlled the Liberator and the Antislavery Standard, the two most influential anti-slavery publications.

The election took place on November 8th, 1864. Only 25 states participated in the election including the newly formed states of Kansas, West Virginia and Nevada.

Lincoln became the second president to be reelected since Andrew Jackson in 1832.

Northern voters overwhelmingly voted for Lincoln. By re-electing him, the country supported his war policy of no negotiation with the Confederacy. Five months after his re-election the Confederacy had collapsed.