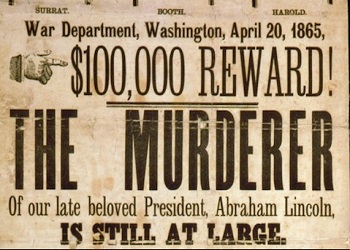 Immediately after the assassination of President Lincoln the War Department issued a $100,00 reward for information leading to John Wilkes Booth's capture.

John Wilkes Booth was an actor and a confederate sympathizer who assassinated President Abraham Lincoln at the Ford Theater on April 14, 1865.

John Wilkes Booth was born on May 10, 1838 in Hartford County, Maryland. His parents came to the U.S. from England in 1821. His father, Junius Brutus Booth was an actor. His mother was Mary Ann Holmes. John was the second youngest of  ten siblings. From a young age he strove to get recognition and fame. 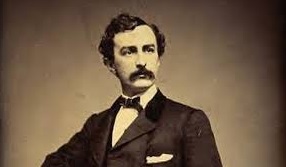 John wanted to be an actor like his father, he practiced elocution and studied Shakespeare. When he turned 17 he made his acting debut at the Charles Street Theater in Baltimore with the role of the Earl of Richmond in Shakespeare’s Richard III. He was an immediate success and was invited to join the theater company to tour the entire country.

Booth was 5’8” or 1.73 m, he had curled jet black hair and an athlete’s build. Some critics described him as one of the handsomest men in America. His performances were a hit with the opposite sex, he was physical and energetic. By 1860 he was touring the country as a leading actor while accumulating wealth. He invested his money in real estate in Boston and oil wells in Pennsylvania. 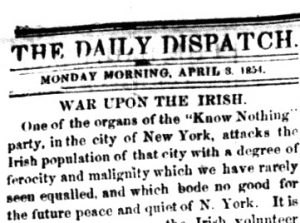 The Know Nothing Party was primarily anti-Catholic, xenophobic and hostile to immigration, starting originally as a secret society.

During the 1850s Booth became politically active by joining the Know Nothing Party, an anti immigrant group whose purpose was to limit the influence of Irish and German Catholic immigrants. He was an ardent supporter of slavery. In 1859 he joined the Richmond Grays, a volunteer group that guarded the execution of John Brown and any attempt at rescuing him. John Brown was an abolitionist who led the Raid of Harper’s Ferry.

During the Civil War in the early 1860s Booth continued to travel extensively to perform in the north and south. He worked as a confederate spy, recruiter and courier as part of the Confederate secret service network.

In 1864 as the presidential elections were coming closer and the prospect of Lincoln winning the election was almost certain Booth prepared a plan to kidnap the president. His plan was to smuggle him across to the Potomac River into Confederate dominated Richmond. He would then be exchanged for Confederate Army prisoners. Booth found out that the President would be attending the play Still Waters Run Deep at the Campbell Hospital on March 17 and considered it a perfect opportunity to kidnap Lincoln. His plan was to intercept the president’s carriage on his way to the play. Booth’s plan this day was spoiled by Lincoln’s change of plan. Instead he decided to speak to the 140th Indiana Regiment.

A second attempt was a plan to kidnap the President at the Ford’s theater but Booth’s conspirators dismissed the plan as unfeasible. 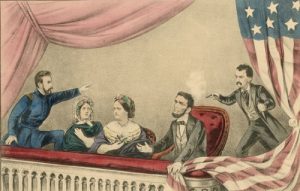 On April 11, 1865 Abraham Lincoln addressed a crowd that had gathered outside the White House celebrating his re-election. This was to be his last public address before he was murdered. In his speech he let know his plan to grant the right to suffrage to African Americans and his efforts to provide education and integrate former slaves to society. To John Wilkes Booth it was the last drop, he was enraged by this perceived injustice. The only way for the Confederation to win was to eliminate the president.

Booth knew that the president would be attending the play Our American Cousin at the Ford Theater on Friday, April 14. Booth was a well known actor who had performed many times at the Ford Theater; in addition he was a good friend of the owner of the theater and would not have trouble accessing the president’s box. Booth had planned to assassinate Lincoln and create chaos in the government by severing the continuity of the presidency and murdering the top three people in the administration. The attacks were to happen simultaneously at 10:00pm. One of his conspirators, Atzerod, was to assassinate Vice President Andrew Johnson but when the time to act came he changed his mind and fled. Another conspirator, Paine (Powell), was to murder Secretary of State William Seward, he did not manage to kill him but was badly wounded.

At around 10 pm Booth slipped into the presidential box and shot the President in the head with a .44 caliber Derringer. Major Henry Rathbone who was accompanying the president at the play was stabbed by Booth when he tried to stop him. Booth tried to escape by jumping down to the stage. One of his legs got tangled in a flag breaking its bone but he was able to make it to the alley outside of the theater where a horse was waiting for him. He escaped to southern Maryland.

The pursuit for Booth 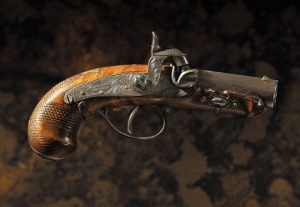 On April 15, 1865 Booth and his conspirators stopped at Dr. Samuel Mudd at St. Catherine for treatment of his injured leg. Federal troops were looking for the fugitives and issued a reward of $100,000 for information leading to Booth’s arrest. In the south, Booth was seen as a real hero who liberated them from the villain who wanted to take away their property. On April 21, Booth and Harold were provided a boat to cross the Potomac and William Jett found shelter for them in Richard H. Garret’s farm. The Garrets were unaware of who they were as they could not get the news because the railways had been destroyed. Jett introduced them as soldiers coming back home and Booth’s wound inflicted during the Battle of St Petersburg.

Union soldiers tracked Jett and in April 28 after a long interrogation he disclosed the fugitive’s location. They were able to locate Booth and Harold in Garrett’s tobacco barn. Harold surrendered but Booth refused saying “I prefer to come out and fight”. Soldiers cornered him by setting the barn on fire. Booth was shot by Sergeant Boston Corbett.