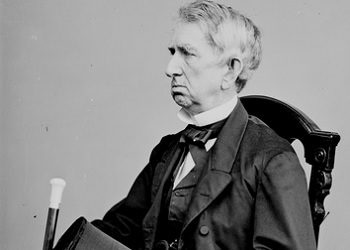 William Henry Seward was born on May 16, 1801 in Florida, New York. His family owned slaves. As a child his parents allowed him to play with slave children and as he grew older he understood the status of his playmates and realized their lives were so different from his. In 1827 slavery was eradicated from New York. Seward became one of the best known abolitionists in the North East of the country. He is known for having been part of the Underground Railroad helping runaway slaves reach safety in the  north. 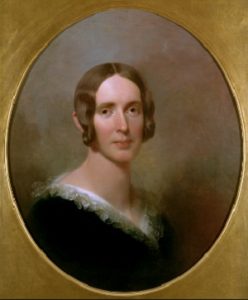 At 15 he enrolled in the prestigious Union College in upstate New York and graduated in 1820 first in his class. He continued his studies of law with John Anthon and after passing his bar exam he settled in Auburn as a junior partner with judge Elijah Miller.

At 23 he married Judge Miller’s 20 year old daughter Frances with whom he had five children. In 1830, at age 29, William Seward was elected to the New York State Senate.

Seward met Thurlow Weed, the man who would help him launch his political career. Weed was a journalist who shaped public opinion through his newspapers and became a Whig and then a Republican Party supporter. For nearly four decades Seward, Weed and Horace Greeley worked together to broaden Whig base support and later for the Republican Party.

Seward was elected governor in 1838 and assumed office on January 1, 1839. He was reelected in 1840 for two more years. During his tenure he showed progressive policies on education and immigration, planning for the expansion of public education and better schools for the black population.

At the end of his second term he returned to private practice. As an abolitionist he believed that whites and blacks should have the same rights to a fair trial. Seward got involved in a controversial case involving a free African American, William Freeman. Freeman suffered from mental illness and had spent time in prison where he was abused. After doing time in prison he was accused of breaking into the house of Henry Wyatt and stabbing four people to death. Unable to secure a lawyer, Seward took his case. To prevent execution Seward claimed insanity, Freeman was convicted but Seward was able to gain a reversal on appeal. Freeman was deemed insane and died in prison.

In 1849 William Seward was elected New York senator. Slavery and sectional issues dominated the discussion in the senate where the resolutions of what was to be the Compromise of 1850 was being debated. Seward was against some elements of the resolution that supported slavery. In a speech on March 11, 1850 he invoked a “higher law than the constitution”, his stand made him a radical Whig, becoming a leading antislavery politician. The Compromise of 1850 divided the Whig Party.

Again in 1854 Democrat Senator Stephen Douglas introduced the Kansas Nebraska Bill which repealed the 1820 Missouri Compromise. The Republican Party was founded in 1854 in reaction to the Kansas-Nebraska Act.

In the 1860 Republican National Convention Seward was a favorite. He stayed home in Auburn and did not attend the convention which was expected at the time; Thurlow Weed attended on his behalf. Seward’s supporters were confident of victory, he was regarded as the leading contender for the nomination. However, he was a dividing figure and was considered too radical a candidate. The Midwest was not ready to deal with slavery; the Know Nothing Party opposed his pro-immigration policy and the Conservative Republicans opposed his radicalism.

When the votes were counted on the first ballot Seward won more votes than Lincoln but was short of the 233 votes needed for the nomination. On the third ballot Lincoln won swing votes in critical states winning the Republican nomination. William Seward was devastated by the results.

Shortly after the election Abraham Lincoln selected William Seward as his Secretary of State. They became friends regardless of their differences and Seward became an integral part of Lincoln’s presidency bringing the experience the president lacked. Seward played a most important role in advising Lincoln in domestic and foreign affairs. He dealt with the Trent Affair and managed to keep foreign powers out of the American Civil War.

On the night of April 14, 1865 Seward was victim of an assassination attempt. John Wilkes Booth and his associates conspired to kill the president and his secretary of state. At the same time that Lincoln was assassinated Seward was being attacked at his home by Lewis Powell. William Seward survived but President Lincoln did not. After Lincoln’s assassination Andrew Johnson was the next in line to the presidency.

After his retirement he traveled around the world and died on October 10, 1872 at his home in Auburn, New York. He was buried in Fort Hill Cemetery in Auburn.