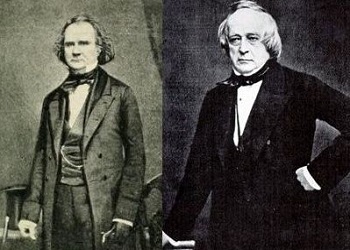 James Mason and John Slidell were on the British mail steamer, Trent, when they were arrested by Union forces.

Foreign affairs did not occupy much of Abraham Lincoln’s time. Secretary of State, William Seward, managed all day to day foreign relation matters.

The relationship with Britain and France became more sensitive after cotton shipments were halted due to Confederate port blockades by the Union Navy which caused a crisis in the textile industry in both countries. Britain and France issued proclamations of neutrality. They recognized the Confederacy but not as an independent nation.

The Lincoln administration most challenging foreign relations affair was in October 1861 in what became known as the Trent Affair. With careful diplomacy President Lincoln and Secretary of State William Seaward avoided the American Civil War to become an international affair.

In the fall of 1862 Britain and France came very close to recognizing the Confederacy. France’s Napoleon had suggested Britain to jointly intervene as trade was disrupted and the Union showed increasing weakness. However there were supporters of the Union in the British cabinet at the time Lincoln had issued the Emancipation Proclamation.

France had suggested a formal proposal of mediation between North and South to find an agreement. President Lincoln and Secretary of State William Seward rejected such proposal. This crisis convinced the president of the importance of influencing international public opinion in favor of the Union. He sent businessmen, politicians and clerics to explain and defend the Union’s actions. Lincoln sent messages to the British unemployed mill workers blaming their situation on the Confederacy and the actions of disloyal citizens. He made clear that they understood that the war was being fought to free slaves and that Britain should never recognize a state that included the institution of slavery.

A further vindication of Lincoln’s and Seward’s diplomacy efforts was in the decision by the British government in September 1863 to seize rams being built for the Confederacy in Laird shipyards. In addition, Russian fleets arrived at Pacific and Atlantic ports to defend the Union in case of British or French intervention in the American Civil War.

James M. Mason of Virginia and John Slidell of Louisiana were named ministers plenipotentiary to represent the Confederacy in Britain and France. In October 1861 they escaped the blockade and fled to Cuba where they boarded the British mail packet, Trent. Captain Charles Wilkes without orders from Washington removed the two men and imprisoned them in Fort Warren, Boston. This act was seen as a violation of international law and a direct attack to British property. Lincoln had no knowledge of Wilkes’ actions. This was President Lincoln’s first foreign affairs incident and because of his lack of experience he had to rely on his advisers.

Lincoln underestimated the seriousness of this crisis by not responding immediately and not following the traditional channels of diplomatic communication. Britain demanded the release of Mason and Slidell and an apology from the US. If the US did not comply, the British embassy would close its office in Washington DC.

The cabinet met on Christmas Day and on the following day. They decided to release the prisoners and avoided the American Civil War to become an international conflict.