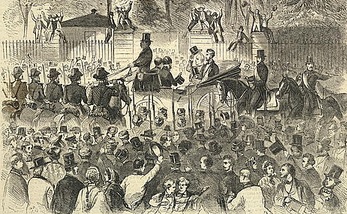 The inaugural procession at Washington passing the gate of the Capitol grounds. Source: Library of Congress. 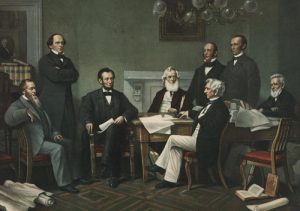 After Abraham Lincoln won the presidential elections on November 6, 1860 he made the decision to offer his rival candidates a position in his cabinet. William Seward became Secretary of State; Salmon Chase, Secretary of the Treasury;  Edward Bates, Attorney General; and Simon Cameron, the War Department. Three former Democrats were offered other top positions – Montgomery Blair, Postmaster General; Edwin Stanton, Secretary of War; and Gideon Welles, Secretary of the Navy. All members of his cabinet were well known politicians, better prepared and had more experience than Lincoln. The president surrounded himself by men from all factions of the Republican Party: Whigs, antislavery Democrats and Free Soilers, a cabinet that would preserve the integrity of the Republican Party.

Abraham Lincoln was inaugurated as the 16th President of the United States on March 4, 1861.  He was the first president to be born west of the Appalachian Mountains and was 51 years old. 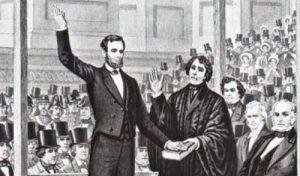 First inauguration of President Lincoln. The presidential oath of office was administered by Roger B. Taney, Chief Justice of the United States.

By this time six states from the Deep South had seceded and created the Confederate States of America. In his inaugural address the president reclaimed all federal forts taken by the Confederation and restated his intention to keep slavery where it was legal but limiting its expansion to new territories and other states. His intention was to stand behind the Republican platform and keep the integrity of the Union.

“I have no purpose, directly or indirectly, to interfere with the institution of slavery in the States where it exists. I believe I have no lawful right to do so, and I have no inclination to do so.”

He also made it clear that declaring secession was illegal and that he would do anything within his power to keep the Union as the Founding Fathers intended. Secession would lead to anarchy.

“no State upon its own mere motion can lawfully get out of the Union; that ‘resolves’ and ‘ordinances’ to that effect are legally void, and that acts of violence within any State or States against the authority of the United States are insurrectionary or revolutionary, according to circumstances.”

In his address he clarified his policy of no confiscation of rebel property and no abolition by force. He sought to avoid violence but made sure that rebels knew that if attacked the Union would respond. To some, his address was taken as a threat to Civil War.

“In ‘your’ hands, my dissatisfied fellow-countrymen, and not in ‘mine’, is the momentous issue of civil war. The Government will not assail ‘you’. You can have no conflict without being yourselves the aggressors. ‘You’ have no oath registered in heaven to destroy the Government, while I shall have the most solemn one to “preserve, protect, and defend it.”

The following day after his inauguration Lincoln received a report from Major Robert Anderson that they needed provisions at Fort Sumter for the 20,000 men already secured. The cabinet was split over surrendering the fort or sending men and supplies.  Lincoln decided they would not surrender and to supply the fort, consequently, on April 12 Fort Sumter was attacked by the Confederates. Anderson and his men were forced to surrender. Lincoln called the power of Government to resist and preserve the Union. This was the beginning of the American Civil War.

In order to deal with the crisis during the transition between President Buchanan and President Lincoln, the House of Representatives created the Committee of Thirty Three which included one congressman from each state. The committee proposed the enforcement of the Fugitive Slave Act, the admission of New Mexico as a state without the prohibition of slavery and the repeal of the personal liberty law in the Northern States that prevented the return of fugitives, and finally a constitutional amendment of the constitution prohibiting interference with slavery. Lincoln objected to all these compromises.