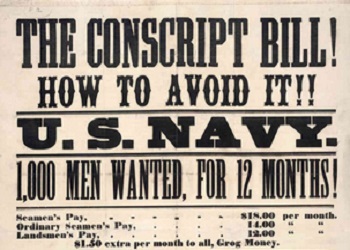 Conscription Act of 1863 led to riots across the country. 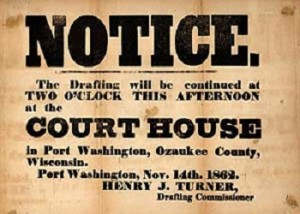 The controversial act required the enrollment of every male citizen and immigrants who had filed for citizenship between ages twenty and forty-five.

Volunteering had almost halted during the winter of 1862-1863. On March 3, 1863, the President Lincoln signed a new conscription act known as the Civil War Military Draft Act. This new act replaced the previous Militia Act of 1862. It called for all males between the ages of 20 to 45 for service instead of assigning quotas to each state. Western states were reluctant to participate, they were not abolitionists and were more concerned about the spread of slavery into their own states. They feared that emancipation would bring a wave of freemen from the south to compete for jobs and bring down wages. 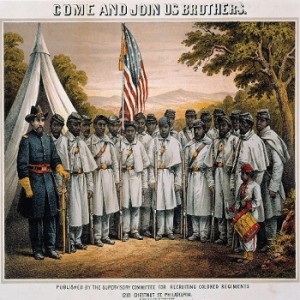 Many African Americans joined the Union Army because they believed it was as a path to citizenship.

Substitution and commutation were frequent practices that allowed citizens to find a substitute or to pay $300 to avoid draft. The purpose was to placate the effect of the draft on pacifists and opponents of the draft. These policies lasted throughout the war. The problem with substitution was that the quality of substitutes was inferior as after collecting compensation they would desert. Commutation was one of the most controversial policies of the war which led to the slogan “rich man’s war, poor man’s fight”

Attempts at enforcing conscription led to sporadic outbreaks of violence in Ohio, Indiana, Milwaukee and Pennsylvania. The worst riots erupted in New York City where Irish American men took to the streets protesting, looting and burning property. More than 100 people were killed before Union soldiers arrived at the scene.

Under the advice of abolitionist and civil rights activist, Frederick Douglass, and facing a shortage of volunteers, Lincoln resorted to recruiting African Americans. They were not recruited as soldiers initially but as laborers and support personnel to garrison and defend forts, positions, stations and other places and to man vessels.