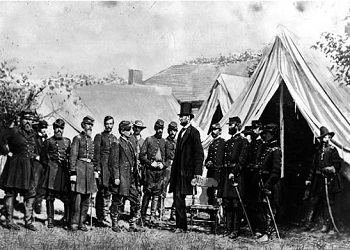 After an unsuccessful start of the war, Lincoln began to personally select commanders based on their military expertise instead of their political alliance. The Union Army up to that point had failed to recover lost forts and cities. They were defeated a number of times in Alexandria, Manassas and at Bull Run. Lincoln was trying to do for his troops what he did for policy making, promoting Union instead of Disunion. He tried to build consensus between Republicans and Democrats. 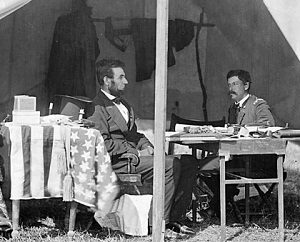 President Lincoln and General George B. McClellan after the Battle of Antietam

Maj. Gen. George B. McClellan organized the forces around Washington, training volunteers and motivating them, they called themselves the Army of the Potomac.

By January 1862, almost a year into the Civil War, the new Republican government of Abraham Lincoln was accused of mismanagement of the Union Army to recapture lost forts, increasing casualties and expenses. Farmers were suffering from the lack of laborers who were fighting the war. Many Republicans were divided and thought of the President as slow and incompetent at making decisions. Lincoln replaced Cameron with Edwin M. Stanton as Secretary of War, all departments were to report directly to the Secretary of War in order to bring efficiency and order.

On January 27, Lincoln published “President’s General War Order #1” ordering all land and naval forces to advance on February 22 and held all commanders accountable. He soon understood the importance of keeping control of war strategy.

However the war was dragging longer than expected. Republicans criticized their president for not realizing that the war was a slave-holders rebellion trying to preserve slavery. Lincoln did not want extreme measures such as emancipation of slaves as his initial vow as president was not to interfere with slavery where it already existed. His presidential campaign was also run on that platform. Lincoln was starting to realize that his policy might be a failure. To make matters worse his son Willie got very ill and on February 20 died of bilious fever. 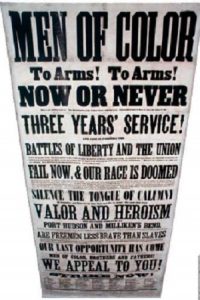 A poster calling African Americans to join Union troops. Abolitionists believed that fighting for the Union was fighting for the freedom of the black man and the safety and security of the country therefore paving their path to citizenship.

The president had made clear that his administration policy on the war against the south was based on no confiscation of property and the limitation of slavery where it already existed. However as the war dragged along, the president and his advisers were slowly experiencing a change of heart.

On March 6, 1862 Lincoln sent Congress a resolution declaring that the US government would cooperate with any state that wants to adopt gradual abolishment of slavery and would be financially compensated. Congress adopted the resolution by overwhelming majority and pledged $500,000 for colonization outside the US. However, none of the border states endorsed the legislation as originally intended, the only positive result was in Washington DC. The government would pay $300 to masters for each emancipated slave.

With the support of Congress, on January 1, 1863, President Lincoln signed the declaration of the Emancipation Proclamation which let slaves free.

The consequences of the Civil War

By May, borrowing had been exhausted and Congress had to issue legal tender paper money, also known as greenbacks. 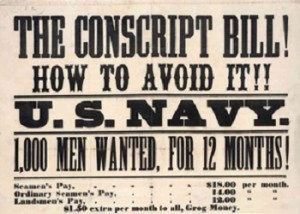 Conscription Act led to riots across the country.

In the foreign affair area, Europe had suffered massive shortages of cotton due to the blockade of ports in the south, leading to high unemployment in the textile mills. Europe was becoming close to recognizing the Confederacy.

Union Armies seemed at times successful but never victorious. Northern states were growing increasingly reluctant to send in volunteers to fight a war that would not eliminate slavery. Furthermore, on Sept 15, 1863 Lincoln issued another proclamation suspending the writ of habeas corpus in the entire country. Any person thought guilty of disloyalty or found guilty of helping Confederate rebel could be arbitrarily arrested.

At the beginning of 1863 congress managed to pass important legislation. Because volunteer enrollment was at all time low a Conscription Act was created. Riots erupted in New York where more than 100 people were killed. Troops from the Army of the Potomac were sent to placate the uprising. 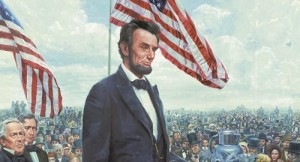 At Gettysburg Lincoln Spoke of Government “Of the people, By the people, and For the People”. This quote has been extensively quoted and cited as the essence of American democracy.

By the spring of 1863 every attack by the Union Armies went wrong, they were defeated at Charleston, Vicksburg, eastern Tennessee and Virginia, naval expeditions were also a failure. Critics blamed the continuous defeats on the lack of organization in the administration. Members of the cabinet did not get along with each other. The radical antislavery wing of the Republican Party demanded a reorganization of the cabinet. Others in his own party considered the presidency a failure and there were rumors that Confederacy groups within the administration were plotting to overthrow the president.

The downward spiral of events in addition to the suppression of civil liberties such as the suspension the writ of habeas corpus troubled many Americans. Many arrests were considered politically motivated, illegal and arbitrary suppressing their freedom of speech.

Fortune was about to change. In the summer of 1863 the Union Army had experience a few victories. General Grant won several battles around Vicksburg, Mississippi. Port Hudson in Louisiana was captured placing the entire Mississippi River under Union control. General Halleck resigned on June 28 and General George Meade replaced him as commander of the Army of the Potomac.

On July 1st the Union and Confederate armies began the Battle of Gettysburg. General Meade defeated Lee. This battle is considered a turning point in the American Civil War. On November 19, Lincoln delivered his memorable Gettysburg Address to commemorate the victory and the lives of those who fought and perished in the Gettysburg Battle. He dedicated a portion of the battlefield as a national cemetery.