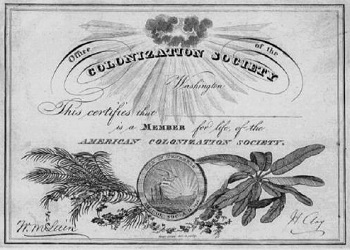 In his 3 hour speech in Peoria, Illinois , Lincoln provided his most comprehensive speech up to that date about slavery. He presented moral, legal and economic arguments against slavery. While he declared slavery morally wrong he also admitted he did not know exactly what should be done politically. He believed, and for most of his career, that colonization would provide the solution.

“If all earthly power were given me, I should not know what to do, as to the existing insti­tution. My first impulse would be to free all the slaves, and send them to Liberia,–to their own native land. But a moment’s reflection would convince me, that whatever of high hope, (as I think there is) there may be in this, in the long run, its sudden execution is impossible.” 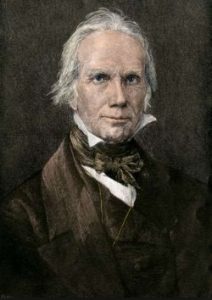 Henry Clay helped establish and became president of the American Colonization Society in 1816.

The American Colonization Society (ACS) was created in December 1816 by Robert Finley, a Presbyterian minister, and by a group of influential men, including Henry Clay, James Monroe, Andrew Jackson, Daniel Webster, Francis Scott Key and Bushrod Washington. The Society raised money by selling memberships and used the influence of its members to raise $100,000 from congress in its effort to transport free black men to Africa.

In January 1820, the Elizabeth was the first ship to sail to Africa with 88 free African Americans. It arrived at the coast of Liberia where they established a settlement. Most of them died as they were not immune from diseases. In 1822 the society established a colony they named Liberia administered by the ACS. Over the next two decades the colony continued to grow and achieve economic stability. In 1847 the legislature of Liberia declared independence and elected Joseph Jenkins Roberts as its first president. By 1867 the ACS had resettled 13,000 African Americans in Liberia.

Members of the ACS were abolitionists, Quakers and Evangelicals and they shared the belief that if repatriated to Africa, blacks would have a happier life away from slavery and racism. Other supporters of colonization believed that it was a way to get rid of the increasing black population and have a more homogeneous European American society.

Colonization was a belief he shared with Thomas Jefferson who supported gradual and voluntary emigration, and with Henry Clay, founder of the American Colonization Society. 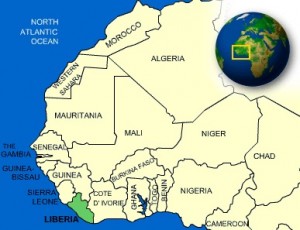 Liberia was Africa’s first republic. It was founded in 1822 with African American emigrants.

Lincoln’s view on slavery, colonization and social and political equality of blacks and whites would evolve over the years. As a young man and until the end of his life he abhorred slavery and thought it morally incompatible with his beliefs. Lincoln believed that all men were created equal but thought that blacks and whites could never live together because of their physical difference (as stated in his speech in Charleston, Illinois on September 18, 1856) and could never reach political and social equality. Colonization provided the solution to slavery. His belief would change during the civil war when black soldiers fought and gave their lives for the Union.

In 1846 when Lincoln was serving in congress the debate pro and against slavery was getting more important. Lincoln searched for a rational view of slavery in a free American society. He shared Henry Clay’s view on the principle of colonization to Liberia and believed that in time Southern slave holders would be willing to manumit their slaves if they were going back to Africa. Lincoln believed that colonization would find support in the north as they would not have to compete with free white labor. But Lincoln understood that distance and the cost of transportation was a deterrent. He did not support deportation by force like many other colonists.

Lincoln’s efforts at colonization during presidency

At the beginning of his presidency Lincoln took important steps towards a colonization plan. As former slaves, who were freed in the south during the civil war, sought refuge in the north colonization was viewed as a practical measure. Racism and fears that they would take jobs and lower wages was widespread in the north so supporting emigration to colonies outside the US seemed like a rational solution to alleviate this problem. Freemen could also join newly freed slaves. In order to oversee his colonization project President Lincoln created the Bureau of Emigration under the Department of the Interior.

In April 1862 slavery was abolished in Washington DC and congress approved $100,000 for re colonizing the newly freed slaves. Shortly after the Second Confiscation Act was issued. It supported the re colonization of those African Americans willing to leave the U.S. to Liberia or other territories in Central America. Congress approved a colonization fund of $500,000 in addition to the $100,000 approved earlier.

The Second Confiscation Act supported the re colonization of those African Americans willing to leave the US to Liberia or other colonies in the Americas.

“And be it further enacted, That the President of the United States is hereby authorized to make provision for the transportation, colonization, and settlement, in some tropical country beyond the limits of the United States, of such persons of the African race, made free by the provisions of this act, as may be willing to emigrate, having first obtained the consent of the government of said country to their protection and settlement within the same, with all the rights and privileges of freemen.”

Colony in the Chiquiri Province in Panama 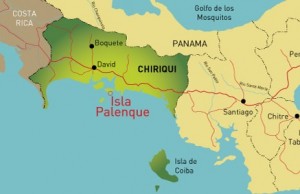 The first colonization project was in 1861 to study the feasibility of a closer colony in the Americas rather than far away Liberia. The Chiquiri Province in Panama was seen as a feasible option. The plan was halted as Central American governments protested that the 1850 Clayton Bulwer Treaty prohibited the US and UK from colonizing Central America. 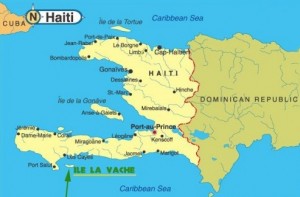 As the presidential elections were approaching Lincoln felt the need to tie emancipation with colonization to make emancipation more acceptable to conservatives. Colonization became a political tool in dealing with the issue of what to do with slaves freed during the Civil War.

After the failure of the Chiquiri colonization project in Panama, Lincoln tried to find ways to diplomatically work with a country willing to accept emigrants. Bernard Kock, a land developer claimed to have obtained an arrangement with Haiti and on December 1863, less than a month before the President issued the Emancipation Proclamation, a contract was signed to transport 5,000 African Americans to Ile de Vache. Of the 5,000 initially approved only 500 left. Those who emigrated to the island were left stranded, many died from diseases to which they had no immunity, and others were rescued one year later by the US Navy. 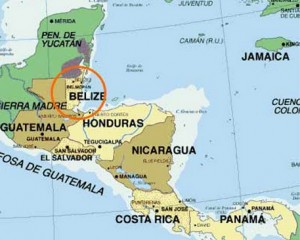 On June 13, 1863 Lincoln signed an agreement with British Honduras to send free slaves to Belize. However the British pulled out of the agreement claiming neutrality in the Civil War.

Mismanagement, corruption and administrative hurdles made Lincoln’s colonization project implausible. Lincoln abandoned the idea of colonization sometime in 1864 because he realized that it was an impractical plan and that the country would benefit from them joining the Union forces. African Americans joining the ranks of the U.S. Army and Navy during the Civil War persuaded Lincoln that these men were willing to fight for their freedom and that of the Union if only given the chance. His colonization plan would have never worked as freedmen did not consider Africa their homeland, they were born and raised in America.

At the end of the Civil War and before his assassination Lincoln made public his reconstruction plans which included to give African Americans the right to suffrage.