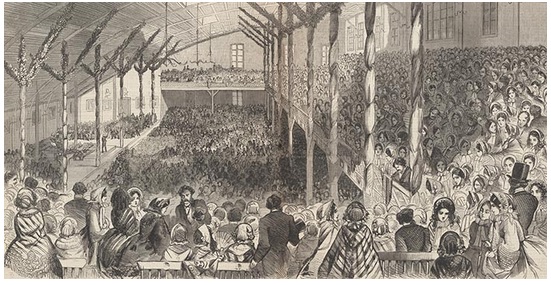 "Republicans in Nominating Convention in their Wigwam at Chicago, May 1860". Source: Library of Congress 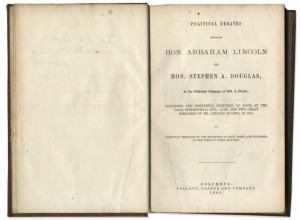 Lincoln compiled his debates with Douglas and had it published in a book.

Abraham Lincoln recognized his chances at getting nominated Republican candidate for the 1860 presidential elections but he also recognized that he was the least known candidate. He was competing against better known politicians such William H. Seward, Edward Bates and Salmon Chase. The prospect of presidency came in 1858 after his campaign for a senate seat against Stephen Douglas.

During his years in Springfield Lincoln had created a loyal circle of friends with whom he travelled the Eight District Circuit. David Davis, Norman Judd and Leonard Swett had helped him in his campaign for congress and could count on them for the presidential nomination.

Lincoln worked to build a reputation nationally. In order to gain recognition and expand his influence beyond Illinois, Lincoln compiled his 1858 debates with Douglas which had been published by Chicago newspapers. He had Follet, Foster and Company of Columbus, Ohio publish it into a 268 page book – Political Debates between Hon Abraham Lincoln and Hon Stephen Douglas, in the Celebrated Campaign of 1858 in Illinois. 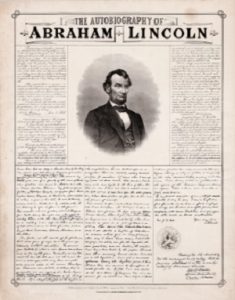 Lincoln prepared two autobiographies for campaign purposes. The first one was written on December 1859 for Jessie Fell, a Republican friend native of Pennsylvania who used his influence and had it published by the Chester County Times of Pennsylvania on February 11, 1860. The article was reprinted by other Republican newspapers across the country. The second autobiography was longer and was written after he was nominated presidential candidate. John Scripps of the Chicago Press and Tribune asked Lincoln to write the autobiography as part of his presidential campaign.

Lincoln was still unannounced presidential candidate when he received an invitation by the Young Men’s Central Republican Union to give a lecture in Cooper Union, Manhattan. In his Cooper Union address he made no reference to his presidential ambitions or that of his rivals. He presented himself as a moderate trying to preserve the Founding Fathers legacy. His speech launched his success in the east.

Next, he traveled north to New England to visit his son Robert who was enrolled at the Phillips Exeter Academy. Lincoln was in great demand at political rallies and addressed crowds at Concord, Manchester, Dover and Exeter. He also helped Republican candidates in Rhode Island, New Hampshire and Connecticut.

Abraham Lincoln made his official announcement at the Illinois Republican Nominating Convention that took place in Decatur on May 9-10. The Republican National Convention took place in Chicago, Illinois. Voters elected Mr. Lincoln as the Republican presidential candidate and Hannibal Hamlin as his running mate. Lincoln was elected on the third ballot over William Seward, Edward Bates, Salmon Chase and Simon Cameron.