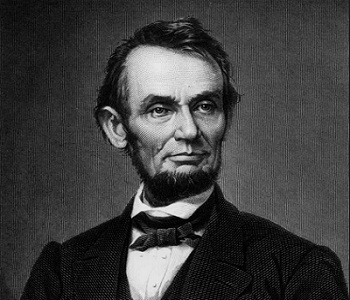 December 20, 1859I was born Feb. 12, 1809, in Hardin County, Kentucky. My parents were both born in Virginia, of undistinguished families-second families, perhaps I should say. My mother, who died in my tenth year, was of a family of the name of Hanks, some of whom now reside in Adams, and others in Macon counties, Illinois. My paternal grandfather, Abraham Lincoln, emigrated from Rockingham County, Virginia, to Kentucky, about 1781 or 2, where, a year or two later, he was killed by indians, not in battle, but by stealth, when he was laboring to open a farm in the forest. His ancestors, who were quakers, went to Virginia from Berks County, Pennsylvania. An effort to identify them with the New-England family of the same name ended in nothing more definite, than a similarity of Christian names in both families, such as Enoch, Levi, Mordecai, Solomon, Abraham, and the like.My father, at the death of his father, was but six years of age; and he grew up, litterally without education. He removed from Kentucky to what is now Spencer county, Indiana, in my eighth year. We reached our new home about the time the State came in the Union. It was a wild region, with many bears and other wild animals still in the woods. There I grew up. There were some schools, so called; but no qualification was ever required of a teacher, beyond “readin, writin, and cipherin,” to the Rule of Three. If a straggler supposed to understand latin, happened to sojourn in the neighborhood, he was looked upon as a wizzard. There was absolutely nothing to excite ambition for education. Of course when I came of age I did not know much. Still somehow, I could read, write, and cipher to the Rule of Three; but that was all. I have not been to school since. The little advance I now have upon this store of education. I have picked up from time to time under the pressure of necessity.I was raised to farm work, which I continued till I was twenty two. At twenty one I came to Illinois, and passed the first year in Illinois – Macon county. Then I got to New-Salem, (at that time in Sangamon, now in Menard county), where I remained a year as a sort of Clerk in a store. Then came the Black-Hawk war; and I was elected a Captain of Volunteers – a success which gave me more pleasure than any I have had since. I went the campaign, was elated, ran for the Legislature the same year (1832) and was beaten – the only time I have been beaten by the people. The next, and three succeeding biennial elections, I was elected to the Legislature. I was not a candidate afterwards. During this Legislative period I had studied law, and removed to Springfield to practice it. In 1846 I was once elected to the lower House of Congress. Was not a candidate for re-election. From 1849 to 1854, both inclusive, practiced law more assiduously than ever before. Always a whig in politics, and generally on the whig electoral tickets, making active canvasses. I was losing interest in politics, when the repeal of the Missouri Compromise aroused me again. What I have done since then is pretty well known.If any personal description of me is thought desirable, it may be said, I am, in height, six feet, four inches, nearly; lean in flesh, weighing, on an average, one hundred and eighty pounds; dark complexion, with coarse black hair, and grey eyes – no other marks or brands recollected. Yours very truly,A. Lincoln