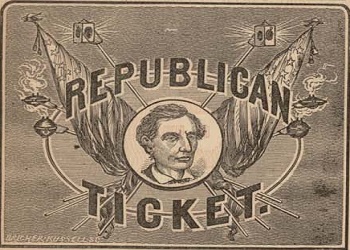 The Illinois Republican State Convention took place at Decatur on May 9-10, 1860. It was here where Lincoln announced his candidacy to the presidential race. He had been campaigning but had not announced his candidacy until this point. He was presented as a self-made man, the son of a pioneer, supporter of free labor and spokesman of the great west. He ran as a moderate as opposed to Seward who preached a “Higher Law” doctrine than the Constitution.

There were four remarkable men competing for the Republican nomination: William Seward of New York, Salmon Chase of Ohio, Edward Bates of Missouri and Abraham Lincoln of Illinois. The four candidates were successful lawyers. Seward was the favorite, he was regarded as the leading contender for the nomination, and his supporters were confident of his victory. Lincoln was the youngest and the least experienced, undistinguished in his one term in the House of Representatives and had lost two consecutive elections to the Senate. However his political genius enabled him to create political partners and friends, generating impressive results at this convention. In the future, as he won the national elections and became president, all of his political rivals in this nomination were eventually given key positions in his government. 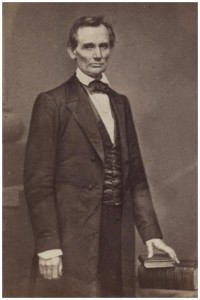 Photograph by Matthew Brady in his New York studio on the same day as Lincoln’s Cooper Union address. This photograph was used in his press campaign, it appeared in posters, buttons, pamphlets, cards. Source: Library of Congress.

Lincoln’s team was led by his trusted friend David Davis who together with Norman Judd had managed to bring the Republican National Convention to Chicago. They represented Lincoln in the Convention and their job was to secure votes for Lincoln on the first ballot. They were ready to answer questions, create liaisons and provide information to other delegations to exert influence.

The Republican National Convention was only the second in the history of the Republican Party and took place on May 16-18, 1860 in Chicago, Illinois. As the election proceeded, the tally on the first ballot was: William Seward 173 ½, Abraham Lincoln 102, Salmon Chase 49 and Edward Bates 48. A minimum of 233 votes were needed to be nominated.

The second ballot narrowed the race between Lincoln and Seward removing other contestants from the race to nomination. There was an important shift of votes to Lincoln. New England shifted 17, Delaware 6 and Pennsylvania 44 closing the gap between Seward’s 184 ½ and Lincoln’s 181.

As the third ballot began, Lincoln gained 4 more votes from Massachusetts, 4 from Pennsylvania and 15 from Ohio. As his total tally reached 231 ½, 4 more votes were shifted from Chase to Lincoln giving him the Republican nomination for president.

One of the most important factors that led Lincoln to victory was his position in the center of the party. Seward and Chase were too radical and Bates too conservative. Lincoln’s men under the leadership of David Davis played an important role in getting swing votes from critical states that did not want Seward elected.

Abraham kept himself occupied during the period after his nomination, mostly outside the state where he was not well known. Photographers came to capture his portrait and reporters inquired for his biography. Perhaps 100,000 to 200,000 campaign biographies were distributed.

Lincoln’s prospect of victory in the general elections had been enhanced by the division of the Democratic Party. The Democratic National Convention took place in Charleston, South Carolina and ended up divided over the issue of slavery. Douglas’ “popular sovereignty” proved too moderate for southern states and the party split. The North nominated Stephen Douglas and the South John C. Breckinridge of Kentucky. 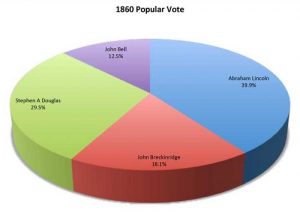 This is how America voted in the 1860 elections. The popular vote went to Abraham Lincoln with 40% of the votes.

Lincoln secured the support and cooperation of his Republican rivals Chase, Bates and Seward for his campaign. As it was customary Lincoln did not tour the country campaigning, his supporters did. Lincoln received visitors and answered letters. He hired John Nicolay, a German-American immigrant, as an assistant. He worked hard on his campaign strategy paying special attention to states where his campaign was experiencing difficulty. Douglas on the other hand became the first presidential candidate to tour the country campaigning for presidency.

On election day, November 6, 1860 Lincoln and his close advisers remained at the telegraph office until about 2 am. The first returns were from New England, Indiana and Pennsylvania, all had voted Republican. When they heard the news that Republicans had won New York, they knew Lincoln had won elections.

Lincoln and Hamlin won 180 Electoral College votes. Republicans won in all free states except for New Jersey where Douglas won. As expected, Breckinridge won in all slave states.

Lincoln was elected President of the United States and Hamlin Vice-President.  He went home and remembered “for I then felt as I never had before, the responsibility that was upon me”.