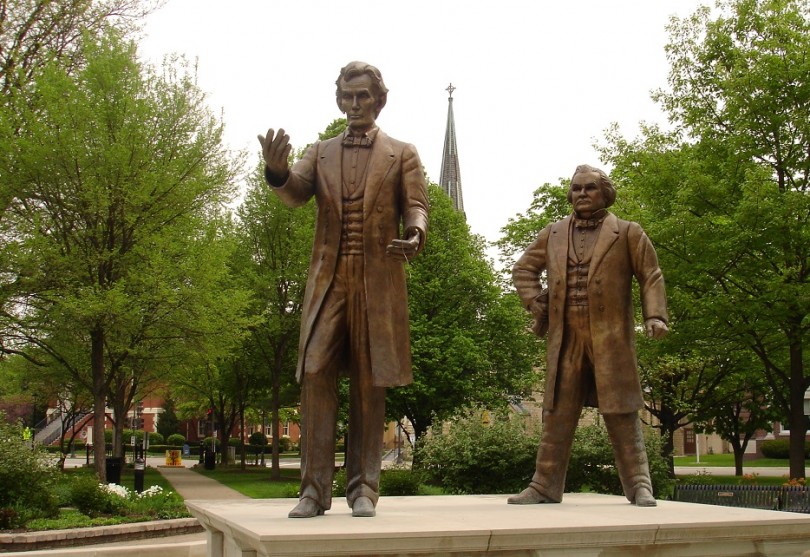 The Republican State Convention met at the State Capitol in Springfield, Illinois on June 16, 1858 and unanimously voted for Lincoln to represent the Republican Party in US Senate. In accepting the nomination Lincoln gave a speech, known as “House Divided”. House Divided, along with his Address at Gettysburg and his second inaugural speech, has become one of Lincoln’s most memorable speeches. 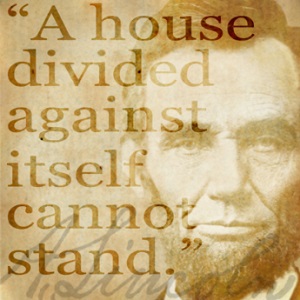 The purpose of his House Divided speech was to show Republicans that Douglas could not be trusted because of his past record supporting the spread of slavery and that his goal was to nationalize the institution. He also believed that the Supreme Court decision on the Dred Scott case would lead to the legalization of slavery in the entire country. The issue of expansion of slavery was dividing the nation. The power of the government over individual state’s rights versus slavery, as an immoral institution, was arousing conflicts that risked the integrity of the Union.

Lincoln’s speech was considered radical at the time. The thought of ending slavery with all its consequences was inappropriate and drastic for a society not yet ready to accept changes. Even though he lost the race to the senate, he caught national attention which ultimately led him to the presidency in 1860.

For six weeks Douglas set on a tour of the state with Lincoln following his steps and providing replies to his speeches. They agreed to participate in 7 debates: 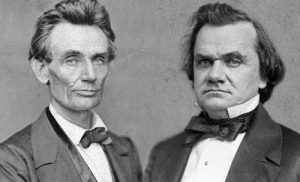 Meanwhile newspapers were following the debates. The New York Times made the observation that the most interesting political battle in the nation was in Illinois between Lincoln and Douglas. The Chicago Times and the Chicago Press and Tribune covered the entire campaign following the two candidates and publishing their speeches.

Instead of discussing issues of importance such as economic policy, tariffs, bank regulation, immigration and working conditions, the debates were centered on the institution of slavery.

Throughout the debates Lincoln charged Douglas as part of a plan to make slavery a national institution. Douglas’ main subject was the protection of the right of Americans to choose and determine their own government and institutions, the right of people to rule. Lincoln valued self-government but believed that it should not overpower the fundamental rights to life, liberty and the pursuit of happiness. Douglas’ position was popular sovereignty and the right of the territories to elect their own institutions, including slavery.

However, during the Senate race, Republicans did not have sufficient votes in the Illinois Legislature to elect Abraham Lincoln to the US Senate. Instead Douglas received 54 votes and was elected for another 6 years, while Lincoln received 46.