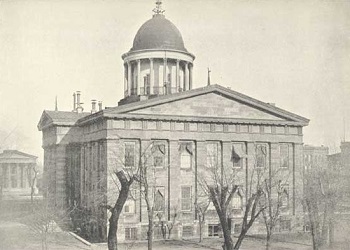 Young Abraham was a very popular man in New Salem. As his popularity soared, in 1832 residents of New Salem suggested him to run for the State Legislature in order to represent the town’s economic interest. His job as a postmaster and land surveyor allowed him to get to know the town’s residents by first name. 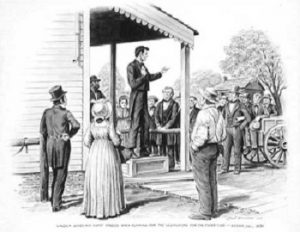 Abraham was well known in New Salem but not in the rest of the county. He was 23 and competing with older and more experienced men. He ran by advocating for improved navigation of the Sangamon River using his practical experience as a navigator. He challenged the construction of the railroad which would bypass New Salem leaving the town at a disadvantage. The election took place on August 6, 1832. There were 12 candidates and the first 4 were selected. He finished 8th and received 277 votes in total, all of which came from the 300 votes cast from New Salem. Years later he recalled that it was the only time he was defeated on a direct vote by the people.

Abraham Lincoln spent a total of 8 years in the Illinois Legislature. Here is where he started his political career that took him to the highest position in the country.

Whig supporter and four terms in the Illinois Legislature 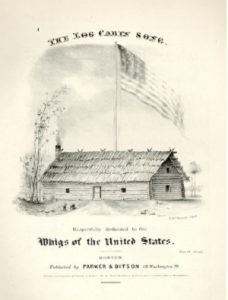 The Whig Party was formed in the 1830s in opposition to Jacksonian Democrats. Kentucky Senator Henry Clay led the party. The party fell apart because of internal issues over the expansion of slavery.

Although he would become the first Republican president, Lincoln was a Whig supporter from the beginning of his political career and served as a Whig during his four terms in the Illinois Legislature. He thought the Whig party agreed on principles he supported and to him it encompassed the promise of the American life. Henry Clay was his political idol. As a Whig in the Illinois legislature he continually supported the National Bank against a Democratic independent treasury system.

In 1834 he ran for the second time for the Whig Party. He ran a handshaking campaign and talked with voters rather than giving speeches. He capitalized on his work as a land surveyor as he got to meet a lot of the county’s residents. The elections were held on August 4, 1834. This time Lincoln received 1,376 votes and was the candidate with the second highest number of votes.

Abraham prepared for his job by borrowing books from John Todd Stuart and buying books in auctions. Law and legislation was what he wanted to master. Lincoln’s first session as an Illinois State Legislature was from December 1, 1834 to February 13, 1835. There were a total of 55 house members of which 19 were serving for the first time. Slowly but surely Lincoln became comfortable drawing up legislation, he mastered the technical language of law and participated in debates. For his first session he earned $158.

When the session was over in February he returned to New Salem where he continued to work as a postmaster and surveyor. Meanwhile he felt the urgency to become a lawyer. He read a lot, mastering difficult works and memorizing and rephrasing arguments.

A third run for the State Legislature on August 1st, 1836 gave him the highest number of votes than any other candidate. During this session Lincoln served as the leader of the Whigs in the State Legislature. He tried to organize his party and became one of the best known Whig leaders in Central Illinois. He tried to defend internal improvements in infrastructure but the economy was faltering and received no support. He also tried to prevent the closing of the State Bank by the Democratic majority.

After the end of his fourth term he did not run again; he aimed at a higher seat, the United States Congress.